I'm Teesha Morgan and this is my blog!

I forgot to add in the competition information that it is only open to Australian residents as international postage is just too expensive.
Cheers,
Teesha
Posted by Teesha at 5:19 PM 0 comments

Email ThisBlogThis!Share to TwitterShare to FacebookShare to Pinterest
Labels: competition

Competition- What did you make for Christmas gifts?

Ok so I have been thinking about a competition and as I was up until 5am Christmas morning finishing off my handmade gifts- I guess a lot of other people were doing the same- so I thought that it would be a good topic for a competition!
So here is how to enter-
1. Like the Craftwerx Studio Fabric Funhouse page on Facebook www.facebook.com/CraftwerxStudio
2. Upload a picture of your handmade gift to the page with your name and the name of the project.
3.Share a link to the competition on your profile.
4. Email your picture to craftwerxstudio@gmail.com with your name, address and the details of your project and the person it was made for ie I made this quilt for my Aunt Dora as she really loves purple.
5. Follow this blog to find out winners etc.
6. Sorry Australian resident only.

The competition will run for 1 month and you can entre as many projects as you like but each time you must share a link to www.facebook.com/CraftwerxStudio
The 5 best entries as decided by me will be chosen at the end of the month and posted on the wall and this blog for you all to vote for. At the end of 1 week, the winner will be the person who's project gets the most votes.

So I look forward to seeing your entries soon!
Happy quilting!

Here are some of the goodies that I made :

Windmills in the Garden Quilt- the next step. 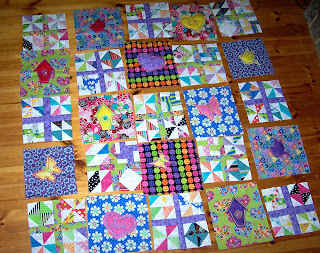 The next step in my Windmills in the Garden quilt was to add the die cut shapes. Before sewing them onto the block, I added som embroidery and as I wanted a slightly 3d effect, I also put some batting on the back of them before embroidering.  I use pre cut die cut pieces but you can also make your own by prining out clip art and then cutting the fabric with it to make a shape.  Once I was happy with the die cuts, I then used the sewing machine on zig zag stitch to sew them onto the blocks. I also varied the thread and intensity or width of the zig zag depending on the die cut size.  The next step is to add sashing, I wasn't going to originally but as part of the organic quilting process, it became apparent that it would look good as the quilt progressed.  Until next time..
Posted by Teesha at 5:44 PM 0 comments

How do I design a quilt? A very common question

As promised, another post although a bit later than I hoped- we have had an awsome heatwave that has knocked the wind out of my sales. But not to winge, I thought that this post I would talk about a question that a lot of new customers and quliting newbies ask me.
How do I go about designing a quilt or project?
I thought that my current mega project would be a good example to  use.
I know that a lot of people have a grand design that they work out on paper first but for me it is a more organic experience. I do all of my patchwork by hand while I relax in front of the TV.
Firstly I had some left over pack of 2.5" squares that I really liked and some great new white on white fabrics and just started making my little triangle blocks with 2 2.5" squares and sewing 2 paralell diagonal lines just off centre and then cutting down between the lines to make one square made of 2 triangles. I use coloured and white and cut the white by eye as I am a huge fan of liberated quilting.
They looked great, so I spent a few nights making those while I was watching TV and relaxing, until I had a big pile.
Then I thought- hmm what if I was to do the same thing but across the square- so I did this and made rectangel ones that were cute too- another couple of nights and I had a pile of those too!
I ironed them all and then played with the different shaped blocks that I could make with them. I made lots of windmills which made me think of how much I loved those kids coloured foil windmils that you blow on when I was a kid. So I spend some time sewin together groovy windmill blocks. and then wondered what to do with the rectangle so basically did the same thing with them and this gave me a sort of plus sign(probably has a quilting name but I don't know it)
I also made some other groovy shapes and then wondered how to put them together, so I kind of layed them all out on the floor and tried some different fabric strips between 4 blocks and then chose the 2 fabrics that I like best and started sewing them together.
That took a while!
I layed them all out on the floor again and thought now it looks like someone has put a whole heap of windmills in the ground, so I thought "Windmills in the garden" it needs some flowers and so the name came about and by adding some 10" funky floral blocks I got my base quilt. 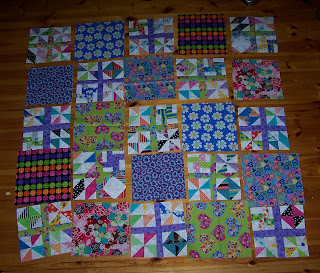 So now I thought that some cute bird and butterfly applique would be a good addition and I am in the process of adding them to the plain blocks. Once that is done I will add sashing between the blocks in a dark colour and then see how it looks.
I will keep you posted on the progress, but I hope that this rambling will help some of our new quilters understand that a quilt doesn't need to be a major production, it can be easy fun and organic in it's design.
Sew until next time! Have fun quilting and don't let it be a drag!
Posted by Teesha at 3:23 PM 0 comments